As a professional speaker and as an executive coach, change and growth are the things that I have been focused on for my entire professional career. Today, as I was on a call with a prospective client, three metaphors came to me. I then shared these examples of using metaphors to create change on a LinkedIn Live, and you can see the video recording above.

In this post, I thought I would go deeper into the definition and power of metaphor for creating change, as well as show you how to use these three metaphor examples and create your own.

A 'metaphor' is a word or phrase that is symbolic of something else. The word comes from the Greek, ‘metapherein’ which means ‘to transfer’. In communication we use metaphor to transfer meaning from one thing to create awareness or understanding in another context.

Not only does a metaphor transfer meaning, it can ‘re-frame’ the meaning that the listener currently holds. This is why skilled communicators, such as coaches, therapists and leaders, use metaphors to influence change and growth, without experiencing the resistance of a direct approach.

The founder of modern hypnosis, Milton Erickson used ingenious, enchanting and extraordinary stories and metaphors. According to Sidney Rosen MD, a student of Erickson’s, anybody who listened to Erickson was likely to experience varying levels of hypnotic trance in which they were open to the messages, suggestions and influences embedded in the stories.

I was once coaching a client who was berating himself for taking someone else’s anger personally, when it really had nothing to do with him.

“Can you imagine someone learning to shoot basketball hoops”, I said,
“Some shots they get in but most they miss. Eventually, after practice, they get more in than they miss. You have only just learned about Self-leadership, so it’s OK to drop the ball occasionally as long as you learn and improve.”

This metaphor of learning to shoot basketball hoops, re-framed my client’s self-criticism to acceptance of the learning process.

As a leader, speaker or coach, you can use metaphors, analogies and engaging stories to:

The prospective client, I mentioned earlier, has joined a new company has his MBA degree and a master’s in engineering and believes he is on track for the C-suite. All of which is great, but he doesn’t know what he doesn’t know, and that is that it takes more than just competence to get to the C-Suite, you need your career to ‘take-off’.

Through my C-Suite accelerator program, I know that you need to inject some energy into making this happen, and that’s when the metaphor came to me. I was born in 1961 the year JFK said, “We are going to put a man on the moon and return him safely to Earth”. As a kid I watched those big Saturn V Rockets lift off. You saw all the power of those Rockets blasting the manned capsule from the earth, through the stratosphere, and then the momentum carried astronauts to the moon!

So, the rocket is the metaphor for investing in coaching to get free of the gravity of you existing mindset or situation, to get on course to reach the goal you desire – the moonshot!

The second metaphor is the slingshot or the bow and arrow. With both the metaphors, the rock or the arrow are pulled back before they are released.

So again, the analogy is the energy required to create velocity. The difference is that with the slingshot you are pulled back before you go forward and this is often true in life.

It is that often a setback that creates the energy to throw us forwards to bigger and better things. So, if like me, you've experienced setbacks in your life you have a choice, at that point, to stay down or use that experience as the energy to project yourself forward

When I’m giving a keynote speech, I often say to the audience:

“I would never wish adversity to happen to any of you. But, neither would I not because it's often through our adversities that we discover our real strength. We discover who we really are and that propels us forward”.

It is an often-used metaphor that personal growth or coaching requires looking in a mirror. When we look at a mirror, we get see our reflection, and we get to see how others see us.

The mirror, in the form of feedback from a coach, says, “Hey, do you notice this, have you thought about this?

Sometimes looking into the mirror is uncomfortable. I use this metaphor as a test when I'm speaking to a new coaching client, how willing are they to look in the to look at themselves, at the things that might be holding them back?

Metaphors are not just verbal; images and video can also effectively transfer meaning. After watching my LinkedIn live, my friend and Visual Strategist, Tim Hamons drew the above 3 metaphors – and here’s his work: 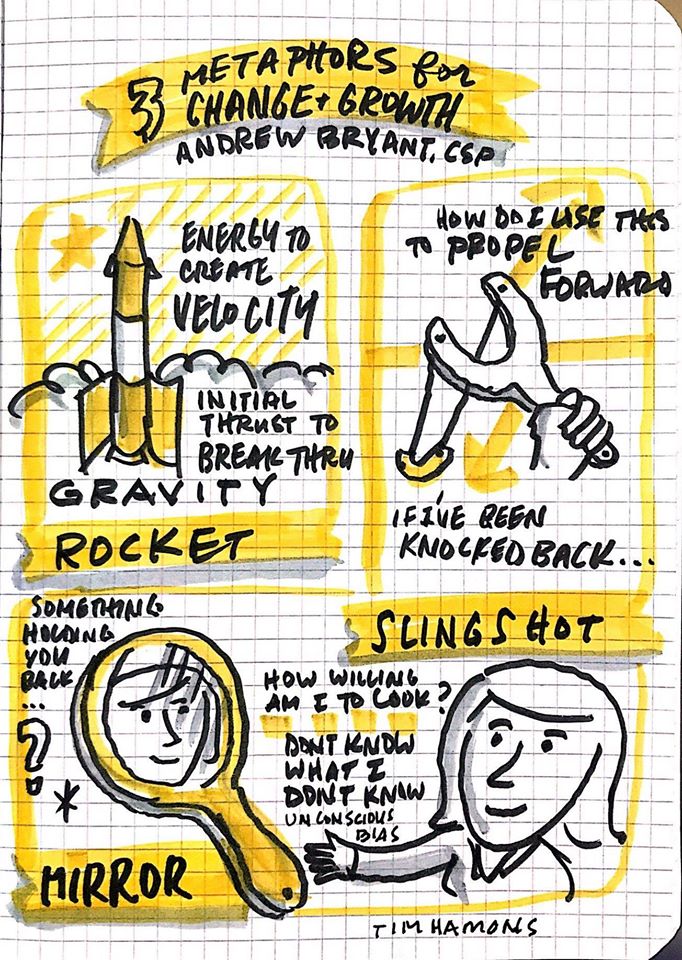 Creating your Own Metaphors

The above examples should give you confidence that metaphors are everywhere, and the skill is in choosing and using them to create the effect you intend. Here are some principles to bear in mind.

I have written previous posts on Presentation Skills and being a Great Keynote Speaker, I suggest you read or revisit them if you want to understand more about the art and science underpinning speaking and presenting.

When it comes to delivering metaphors, I wonder if you have ever read a bed-time story to a child?

The story might seem simple to you, the message obvious, but the child listens with wide-eyed wonder, even if they have heard it before.

Perhaps you can imagine, what it would be like, delivering your story  with the same wisdom and empathy of a parent, and be pleasantly surprised by the magical transformative power of the metaphor?

And that's all I will say on that matter.